It’s #LockdownStories day! a our guy, Dominic “Doom Cannon” Canning. Dom has been with the Bloco for 10 years, this year. He started out as a participant and then went on to join us as trainee leader and a firm fixture in the Drum squad Tutor team supporting the learning of our Bloco members and teaching, even arranging songs for the Big Bloco.

However, his musical journey has taken him to new places. He’s now part of various projects like Steamdown. He has a few awesome bands on the go – Doom Cannon and Project Karnak; and is the Musical Director for soul singer, Celeste. So, we don’t see him as often as we used to, but he still supports KB. We asked him what he’s been up during the lockdown.

I, Shay, caught up with Dominic during his 1-hour exercise in his local park. The intention was a video interview, but my Wi-Fi connection had different plans. Upon viewing my footage after the interview, the last 15 mins of the 18 min interview (with loads of laughter in between) was a freeze-frame and a very unfortunate freeze-frame for us both. Thanks Internet! So instead, you can read it and see some of his Bloco pics.

Section: Dom is Alumni and Drum Squad for life

So, Dom, what were you doing pre-lockdown?
Dom: “Pre-lockdown I was gigging a lot. I’m a musical director for an artist called Celeste. She’s an incredible soul singer. We were just about to go on tour and then it got cancelled. Yeah, there was so much [planned]… I was getting ready to record an EP with my band Doom Cannon and my other band, Project Karnak and it all just got put on hold. Which is a shame but also, is a good thing because it gives me time to just write a lot of music. Writing with Karnak, Doom Cannon and Celeste. It’s a blessing in disguise because it was always work work work work work and now you have time to write. So, I’m literally using this to get everything done that I’ve wanted to do but I haven’t had time to do it.”

Oh cool. So, what else have you added? What are you adding to your Lockdown life (Shay adds a little dramatic music)?
Dom: “I’ve been cooking a lot and I’m baking. Yeah, coz I’m Veh-gan.”
Shay: I did a bit of a double take: “You’re vegan! WOOOOW!”
Dom: “Yeah, well, I’m trying. Obviously… I made a chocolate cake the other day. It wasn’t vegan but…you know…you just can’t beat chocolate cake. Ok, I’m like 90% Vegan. I’m trying. [But] yeah, I’m cooking a lot more. I’m doing like, chickpea curries, I’m doing Jackfruit, Jerk Jackfruit. I‘m making Falafel. The other day I made burger sauce. Small things like that! Made Teriyaki sauce. Yeah, just small things like ‘at!” Dom smiles widely with pride. “Yeah, so cooking, baking, jogging errr…PRACTICING! This is something I’ve always struggled with. It’s so hard to get into a routine where you feel like it’s actually making a difference to you. Because you could spend hours at your instrument, and nothing goes in. So, I’m trying to pinpoint things that I need to work on, talking to other musicians, and just working smart, not hard. I think that’s my motto for this year: working smart, not hard! Like maybe spending half an hour on this exercise and calling it a day. Doing that every day. I’m [also] producing as well for some artists.
So, yeah there’s a lot of stuff I’m doing to keep myself busy. Some may say too much.” The big Dominic grin is back, but this time with a bit of mischief in his eyes, “But to wind down, I like to play games! I like to play Call Of Duty, yeah, yeah! I actually (play) Call of Duty with Jaz (Fellow Bloco member). Yeah, it’s nice! It’s a good time!” he nods in agreement with his statement.

What are you finding challenging? 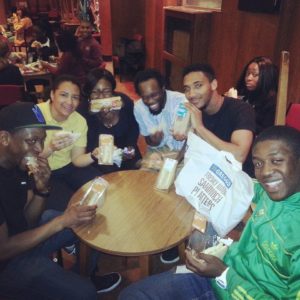 Dom started answering me, then forgot the question, so I asked him again. Here’s what he said.
Dom: “I think everyone’s finding this hard, just being sociable. Not being able to talk to enough people. It’s quite hard! And keeping your spirits up. One thing ‘m trying not to do is watch the news too much, it’s just so sad. On the radio today I heard Trump saying we should try and cure Coronavirus with Bleach.” We both take a very pregnant pause, some nods and some awkward side-looks.
Shay: “Gives you a lot to think about!
Dom laughs: “Yeah, so you know, yeah, there’s so much. Also, saving money as well, is one thing I’m finding hard; I’ve always found hard.

I know, and I’m thankful somebody has said this. Saving money! Lockdown; I thought I was going to save loads of money because I’m not going anywhere. What has been your trap?
Dom: “Noooooooo!” Dom pretends to call to the skies for help. “Deliveroo and Amazon. I think the Deliveroo thing I’ve sort of conquered a bit because I started to cook more so I haven’t ordered in about 2, maybe 2… Let me be real with myself, maybe about a week. But that’s a good thing because I was ordering maybe every 4 days or so. And I live in a Caribbean household, so my mum and dad were like, why you ordering food for? Why doing…? I was like, mum, I’m a big man. If I want to order a Katsu curry, you know. But you know, they only do it of the love. And yeah, Amazon. I’ve just been buying…to be honest, it’s not been rubbish. I’ve been buying books to practice with. What else have I been buying?! …I’ve been buying hoodies” He hangs his head in shame. We both end up laughing.
Dom: “I bought some jeans!” We laugh harder “Yeah, it is hard. The thing is, I buy these things and I’m like, I’ve got to wear them to the living room now. I can’t really do anything else.”

Are you still teaching any?
Dom: “Not actively. No. People come to me for advice, which I still don’t quite get. I’ve been giving advice here and there. I may start teaching again. I stopped [teaching] for a year. Which was scary. I was fully living off gigging and that has problems in itself. But I’m thinking I’m going to have to start teaching again because we don’t know when venues and stuff are going to start opening again. As soon as the venues are open, we can start getting work, but we literally don’t know.” 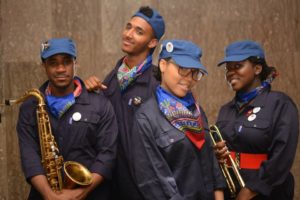 Last question, if there was one thing that would make anyone smile if they were feeling down about their situation, what would you share? It doesn’t have to be profound!
Dom: Silence, “you know me, it wasn’t going to be profound.” Even though we both laugh, believe me, it’s not true. “You know what, go online. There are so many great memes out there, man. Memes have been taking me through this quarantine. I would be so upset if I didn’t have memes. Some of the intelligence out there that the people have. It’s just funny!
I watched Dion Cole, it’s a Netflix special (Older teens and adults!!). Comedy!”

Dom looks off into the distance distracted by park life: a dog named Frodo is fighting other dogs. I’m also interrupted at the same time by home/office life aka the cat! 5 mins later, we resume the interview…

Dom: “Yeah, memes. That’s the strong one. Not watching the news. Meditation. There’s an app called Calm that my partner put me on – looking after your mental health. Taking the time to settle down and to reflect and to see what you’re grateful for. The two Ms; M & Ms; meditation and Memes. And…”
Shay: “…and amazon buys?”
Dom: “Let’s not talk about that one, it’s a bit of a sticky one.”

We share a few more laughs, a dog even pops on screen to join us and then we say goodbye. So that’s what he’s up to. Thank you, Dom!

This website uses cookies to improve your experience while you navigate through the website. Out of these, the cookies that are categorized as necessary are stored on your browser as they are essential for the working of basic functionalities of the website. We also use third-party cookies that help us analyze and understand how you use this website. These cookies will be stored in your browser only with your consent. You also have the option to opt-out of these cookies. But opting out of some of these cookies may affect your browsing experience.
Necessary Always Enabled
Necessary cookies are absolutely essential for the website to function properly. This category only includes cookies that ensures basic functionalities and security features of the website. These cookies do not store any personal information.
Non-necessary
Any cookies that may not be particularly necessary for the website to function and is used specifically to collect user personal data via analytics, ads, other embedded contents are termed as non-necessary cookies. It is mandatory to procure user consent prior to running these cookies on your website.
SAVE & ACCEPT
Join our mailing list

At Kinetika Bloco we take your privacy seriously and will only use the information you provide on this newsletter sign up form to send you our Kinetika Bloco newsletters. The data will be held within MailChimp and not transferred to Kinetika Bloco or any other organisation. You can unsubscribe at any time or update your information by clicking on the link at the bottom of the newsletter.
If you would like to read further information about MailChimp’s Privacy Policy please click here.