We have asked some of our International Bloco friends to join us in sharing what they’ve been up to and how they’ve been dealing with the changes COVID-19 has brought.

Meet Lila, from Oslo, Norway! Lila is a Trumpeter and trombonist with her school, Grunerløkka’s Marching band, as a well as a DJ. We met Lila when the lovely Stu from Beatlife (at the time) introduced us to Dominic, her dad. In 2016, Dom and the Grunerløkka governors fundraised and brought the Grunerlokka School Marching Band to our summer school. We’ve been friends AND visiting them every year since.

Lila, the DJ – Lila, or DJ Lila Gold started playing reggae at the age of 12 making her Scandinavia’s youngest reggae selecta. She plays mostly contemporary roots artists with a splash of positive dancehall.

Here’s what Lila has been up to during the Lockdown:

Bloco connection: After coming to the summer school with Grunerløkka School’s Marching Band (from Oslo) 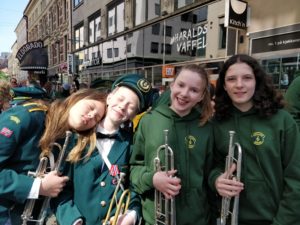 What have you been up to during your lockdown? The first few weeks we had loads and loads of school work to do at home – which was pretty boring to be honest – more school and no socialising.

How are you feeling? Basically Ok. Its been a bit boring.

How do you feel about your exams/gigs/teaching being off for now? Home schooling is quite boring, I miss the social aspect of school.  So far it has been ok to have a break from music practice and the online lessons have actually been kind of fun. We won’t be doing our usual 17th of May celebrations here in Norway, but will be playing in our local area of Grunerløkka so that might be quite nice.

What are you finding difficult? Getting up in the morning, because it feels like I dont have to do anything.

One thing that would make anyone smile if they were feeling down right now: I recently heard that a group of bunnies is called a “Fluffle.” Also, you could watch me and my Dad Djing on Facebook – Facebook: Dominic Reuben

If we want to find out more about you or your organisation what’s the link: Grunerløkka School Facebook

As said, Dominic, with the other Grunerløkka School Governors and parents, fundraised with the band members to visit our Summer School. It worked…Oslo to London! In Summer 2016, 25+ Grunerløkka Marching Band members with parents and friends, walked through the doors of the Southbank Centre! They brought their cool Scandanavian vibes, instruments, great music and friendship. Every year since, except this year, we’ve gone to Oslo to play and march with Lila and the Grunerløkka Marching Band in the Norwegian Constitution Day Parade! It is an honour to play with some of the most cool, welcoming and lovely people we know. And, of course, to be part of their celebration of their nation!

This time last year, we were in Oslo seeing our friends and preparing for the parade day: the 17th May! Which this year, is on Sunday. Though we’re sad we’re missing it this year, we’re hopeful that next year, we’ll join them again! 😊
Here’s one of our fave moments from 2018’s Norwegian Constitution Day –

This website uses cookies to improve your experience while you navigate through the website. Out of these, the cookies that are categorized as necessary are stored on your browser as they are essential for the working of basic functionalities of the website. We also use third-party cookies that help us analyze and understand how you use this website. These cookies will be stored in your browser only with your consent. You also have the option to opt-out of these cookies. But opting out of some of these cookies may affect your browsing experience.
Necessary Always Enabled
Necessary cookies are absolutely essential for the website to function properly. This category only includes cookies that ensures basic functionalities and security features of the website. These cookies do not store any personal information.
Non-necessary
Any cookies that may not be particularly necessary for the website to function and is used specifically to collect user personal data via analytics, ads, other embedded contents are termed as non-necessary cookies. It is mandatory to procure user consent prior to running these cookies on your website.
SAVE & ACCEPT
Join our mailing list

At Kinetika Bloco we take your privacy seriously and will only use the information you provide on this newsletter sign up form to send you our Kinetika Bloco newsletters. The data will be held within MailChimp and not transferred to Kinetika Bloco or any other organisation. You can unsubscribe at any time or update your information by clicking on the link at the bottom of the newsletter.
If you would like to read further information about MailChimp’s Privacy Policy please click here.